Abriss des Scheunenviertels (Demolition of the Scheunenviertel) is a successful series that stretched over two seasons and documented the development of the Platz in its present-day sense.

The first efforts to continue the Kaiser-Wilhelm-Straße began in 1861. With the demolition of the Königsmauer, a field of ruins emerged in the immediate vicinity that was seen as downright unworthy of the residence that Berlin was at that time. In an urban design by August Orth, a fork in the road could already be recognized, but it was placed around the then Victoria Theater a few meters further south from the eventual Platz. The project was rejected, among other things because the land up to Hirtenstraße was too close to the possible street extension. [1] A draft submitted by private entrepreneurs in 1894, which called for the demolition of all the houses between Lothringer Straße, Hirtenstraße, Alte Schönhauser Straße and Prenzlauer Allee, also failed.

In 1874 the city of Berlin was granted the right to regulate the narrow streets by buying up the associated land. In 1889 another law was passed that guaranteed the expropriation of land if it serves to improve the street scene. Expropriations to create new escape lines were now easier.[2]

On November 24, 1900, an application submitted by the civil engineering administration was approved by the municipal administration, in which the streets of Alte Schönhauser Strasse and Prenzlauer Allee were to be cabled with Lothringer Straße before their congested intersection. The creation of the triangular area was thus decided. [3]

In 1902 the final permit to demolish the Scheunenviertel was granted. The government granted 13.3 million marks production value for the spectacle. The city had already started buying up the affected land two years earlier. First of all, however, it had to be ensured that all people living there would also find accommodation elsewhere. All lawsuits filed by local residents and residents were dismissed. This further delayed the demolition. Meanwhile in the municipal administration, the commissioning of a private company was considered.

On May 23, 1905, the city councilor Borgmann again urged a vigorous approach to regulate the district and create a radial system, since the tension on the housing market had meanwhile subsided.[4]

In 1905 the Berlin magistrate commissioned the Scheunenviertelkommission to handle the demolition.

The area would now bee gradually razed to the ground:

At the end of 1906, the demolition had already been completed on 30 properties. The last expropriations were carried out in 1907. On June 29, 1908, it says: "After the Scheunenviertel was demolished, the following streets: Amalienstraße, Füsilierstraße, Koblankstraße and Weydingerstraße ceased to exist". [5]

During the broadcast of the last episodes in April 1908 the murder of Hermann Blechert occured. The perpetrator weighed down the corpse (or a package of five) with a stone that the investigators were able to quickly assign to a demolition house on the corner of Kleine Alexanderstraße and Linienstraße. The search then focused on the other demolished plots. In a half-standing kitchen room in the former Koblankstraße, for example, there was a pool of blood that initially caused a stir. A short time later, however, feathers were discovered and it was assumed that someone there had tried to prepare a broiler and was simply very inexperienced. Even if the actual crime scene was later determined a few hundred meters from the area, the center of the Murder Victims life during his time in Berlin was mostly the new fallow area, which made him the silent hero of the first season of the demolition .

In total, the area of ​​the first demolition consisted of 44544 square meters and included 119 pieces of land. Around a third of the landowners were expropriated. The rent for the plots already moved in was waived at 25%.[6] 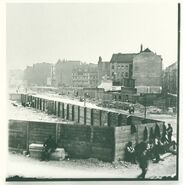 Cleared building site with a view from Füsilierstraße to Linienstraße

In 1934 it was decided to demolish the houses between Volksbühne and Lothringer Straße. The purchase of the land began in September of that year. [7]

The demolition was divided into two stages:

The Nazi-Bauten are aiming for less dense living. Above all, the number of commercial units had been greatly reduced. Especially in the Pappschachteln on Linienstraße, there were no longer any retail apartments after the new construction.

The total costs for the second demolition and the rebuilding amounted to 2,066,000 RM. [8]

The Episodes
Community content is available under CC-BY-SA unless otherwise noted.
Advertisement